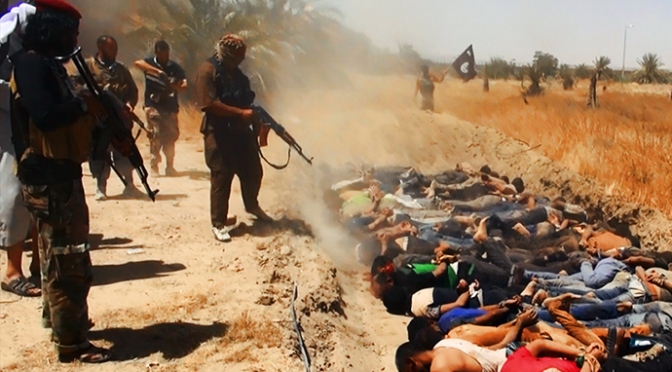 Isis is surrounded by a series of mysteries without apparent explanation. What enabled Isis to conquer a large part of Syria and Iraq with such stunning rapidity? How does a collection of untrained fanatics rapidly integrate sophisticated U.S. weapons systems captured during this conquest, and command far-flung battlefronts? Where does the Islamic State, bordered by hostile and warring powers, obtain food for the millions under its control? There is increasing evidence that the explanation for all these anomalies can be found in Turkey’s secret backing of ISIS.

One example of how Turkey supports ISIS is through its oil sales. ISIS now controls oil fields in Iraq and Syria capable of producing a total of 120,000 barrels a day. The oil is transported into Turkey, where it is sold at a 70% discount, primarily to Asian markets. According to Dr. Issam Al-Chalabi, Iraq’s former oil minister, ISIS earned between $100 and $150 million dollars in 2014 from its oil sales, which take place exclusively through Turkey.

A nexus between ISIS and Turkey would explain Turkey’s seemingly irrational behavior in allowing ISIS to pump and sell oil, bring in supplies, and move an estimated 8,000 European recruits through its territory.

Despite serious U.S. pressure, including a personal visit by U.S. Secretary of State John Kerry, Turkey has resisted all requests to stop the flow of men and material to and from ISIS. The German television broadcaster ARD recently reported that ISIS has an unofficial recruiting office in Istanbul’s heavily Islamist Fatih neighborhood. European recruits pass through the office and are given money and supplies before being sent on to ISIS in Syria. According to Skeikh Nabil Naiim, a former Jihadist with unique sources in the movement, there are ISIS training camps and hospitals in Turkey along the Syrian border.

Further evidence that the Turkish government is aiding ISIS was sent to the EU ambassador to Turkey in a June 2014 report by the Mayor of Mardin on the Syrian border in southeast Turkey. According to the report, ISIS members are brought to the border in Turkish Army uniforms and allowed to cross into Syria to join the battle. The report also states that a representative of Turkey’s ruling party has met with ISIS representatives at the border.

More recently Newsweek Magazine published an article quoting a former ISIS communication technician detailing Turkish cooperation with ISIS. On “innumerable occasions” he reported hearing communications between the Turkish Army and ISIS field commanders coordinating attacks on Kurdish forces. These communications occurred while he was posted to ISIS headquarters in Raqqa Syria and on the Turkish border where he witnessed the Turkish Army allowing ISIS to cross freely on their way to and from battles with the Kurds.

Meanwhile Turkey refuses to participate in or support the U.S. bombing campaign, and has rejected urgent requests to aid the Kurds desperately fighting ISIS on its border. Why did ISIS lose months of effort and over 1,000 men in its recent failed attempt to take Kobane, a small Kurdish town? Kobane directly abuts Turkey and contains a border crossing that would have offered unfettered access to that nation. A connection with ISIS explains why Turkey never brought significant forces to that border when a large ISIS force approached to within a few hundred yards.

Assistance from Turkey’s large, modern army would also explain how ISIS has been able to simultaneously coordinate wide-ranging battlefronts against the Kurds in the north, the Iraqi army in the east, and Assad’s forces in the west from its distant headquarters in Raqqa, Syria.

Similarly, it is otherwise impossible to explain how ISIS has been able to quickly integrate large amounts of sophisticated U.S. weaponry captured from the Iraqi army. These weapons reportedly include Black Hawk UH60 and Bell-IA-407 helicopters, the M1 Abrams tank, M79 rockets, 155mm GPS guided artillery and the FIM92 Stringer MANPAD air defense system. It has been postulated that integrating these weapons may have been enabled by Baathist officers expelled from the Iraqi army eleven years ago after Sadaam’s fall. Sadaam’s army, however, was armed and trained with Soviet weapons, as are the Syrian and Iranian armies. In contrast, NATO member Turkey possesses an army familiar with the latest U.S. weapons systems.

Why would Turkey support ISIS? After many decades as a secular democratic state, Turkey is now ruled by an Islamist government with ambitions to unite the Sunni Arab world and restore, in a sense, the Turkish hegemony of the Ottoman era. All the forces attacked by ISIS to date oppose, or are rivals to, Turkish hegemony, and are groups to which the current government of Turkey has demonstrated hostility. This includes the Kurds, and especially Turkey’s rival for regional hegemony – Iran and its proxies Assad’s forces in Syria, Hezbollah, and the Shiite dominated Iraqi government. Meanwhile, ISIS inexplicably ignores softer Sunni targets such as oil-rich Saudi Arabia and other Gulf states.

As part of this effort to gain favor with the Sunni Arabs, the Islamist government has dramatically reversed Turkey’s long-standing friendship with Israel. Turkish Prime Minister Erdogan publically supported the IHH terror organization’s flotilla attack on the Jewish State. He demanded that Israel apologize for defending her territorial waters, although even the UN has declared her actions justified. Erdogan has blamed Israel and the Jews for everything from strife in Egypt to anti-government demonstrations by Turkish citizens. He has characterized Israel’s war of defense against Hamas as “barbarism that surpasses Hitler.” Erdogan’s vitriolic attacks on Israel are so utterly irrational that there are some who question his sanity.

Anyone who knows Turkish history can believe that Turkey could support a group as brutal as ISIS. ISIS’ attempted genocide against the Yazidi people has as its precedent the Ottoman genocide of over one million Armenians, which Turkey denies to this day. The methods used by ISIS are eerily similar to those used by the Turks in 1915, up to and including besieging the final survivors on a mountaintop.

The exact nature of the relationship between Turkey and ISIS, is not clear. Perhaps ISIS is a creation of Turkish intelligence (or rogue elements therein). This proved to be the case with the Afghani Taliban, which were ultimately found to be a creature of the Pakistani ISI. More likely, ISIS is Turkey’s proxy, indirectly allowing it to gain control of territory and battle Iran for regional ascendancy.

For the record, I am privy to no inside information on Turkey’s relationship with ISIS. The facts I’ve related above were garnered from the U.S. and Israeli press. Increasing evidence of Turkey’s secret support for ISIS makes sense of otherwise inexplicable and seemingly irrational events. Turkey can easily disprove this supposition by reversing policy and cooperating in the United States’ war against ISIS. If she persists in her refusal to do so, it is in the U.S. interest to investigate the exact nature of Turkey’s relationship with ISIS.